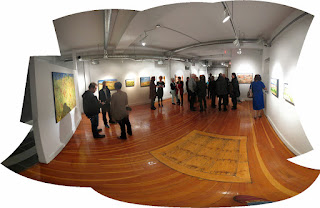 It's been a long week. I thought it was going to be a normal week, but I ended up feeling like I was running every day. The weekend will be complicated but we wanted to start it off with our weekly French film (this week I'd chosen the heartwarming Canadian feature, "Bon Cop, Bad Cop"). William had the day off school so we felt we should have at least one outing before we parked ourselves on the couch so we headed out to the Artful Dodger for the opening of an exhibition of paintings by Edie Marshall. Had a couple of great conversations and made an impulse purchase in the shop (more on that tomorrow).
Priming up for Terrible Film Festival on Sunday. Carillon Article came out yesterday. Also was on CBC Radio yesterday talking about it.
Posted by Gerald Saul at 11:31 PM