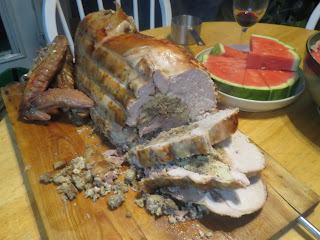 We were invited to Rudi and Terri's for a magnificent turducken meal tonight, masterfully prepared by Rudi. For those not in the know, this is a chicken inside of a duck inside of a turkey, all cooked together. To serve it, the creature is split in half (down the spine, and then cut into slices so that each piece contains all three meats. I've been hearing about these for years but this is the first chance I've had to try it. I expected it to have more grease (I know that goose is quite greasy so assumed duck was as well) but it was not. Rudy made a gravy from the drippings which was served alongside but which he also saves for what he says is the best poutine.
Posted by Gerald Saul at 11:47 PM