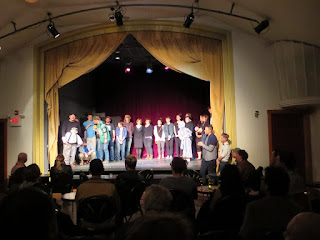 The IPUFF festival featured an adults only cabaret. I got there (alone) just in time as we'd picked up last minute tickets to a stand up comedy performance of four regulars from the CBC show "The Debators". The standup was good. Margaret thought it a bit raunchy for William but I didn't think it ever went too far (or far enough?). I dropped them off and got to the cabaret, in time to get a seat before they began, but not in time to get a drink. It consisted of about 8-10 live acts, MCed by Cam and Andy with Cam using Andy as a full sized puppet. These bridges, as with the performances, were tight and funny. Never a dull moment, I had a fantastic time. Like the earlier performance, Margaret would certainly have felt it was too adult for William, althouigh I'm certain he'd have enjoyed it and I'd not have felt he needed to be protected from any of the words or ideas. I think the adult label was ultimately to free the performers to push the limits of story, expectation, and convention more than to protect the audience. Great fun but feeling a bit too sober, I didn't stick around afterwards.