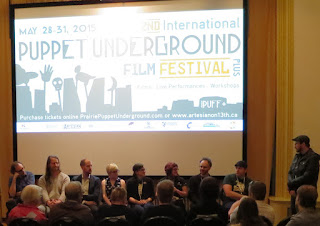 It was a big night for IPUFF. The evening began with an amazing performance by Saskatoon's Howl Theatre presenting "Aiden Flynn Lost His Brother So He Makes Another". This was a wordless play mixing live action, puppets, and shadows and was the most moving experience of the night. It will be presented again on Saturday evening and I would highly recommend it. William got a chance to interact with them and I could tell he was also very touched and thrilled by them.
Film screening afterwards was quite good. It began with international entries (top notch, especially a crazy surreal thing called Happy Memories by Jack Fields. Local films included a touching film by Berny Hi in which he boldly immerses into sentimentality and pulled us headlong with him. I completely bought it (even though 35 isn't old). "Star Bright, Meagre Might", my newest Canister film was included. I think the audience appreciated the nature of it, or at least were amused when we discussed it in the Q+A.
Posted by Gerald Saul at 11:46 PM