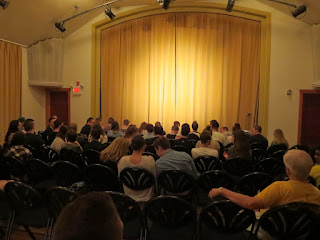 Improv at the Artesian began tonight with a set by Combat followed by Hitchhikers. We usually go to Combat and they were on their game. A particularly funny bit was when they had ghosts that were, for some reason, being brought by the milkman in bottles and were then revealed to be the spirits of the lost children on the outside of the cartons. It really built organically. The Hitchhiker group is less familiar to me. Their concept was very intriguing. They divided into two groups with each group making a secret video to introduce an improv. They then supplied the other group (two groups of three) with costumes and the groups watched the videos with the audience (sight unseen) and had to fill the roles depicted. While very interesting conceptually, the videos were too long (too ambitious) resulting in the performers being hamstrung by the roles and the narrative feeling forced.
Posted by Gerald Saul at 11:06 PM

Love these reviews. Looking forward to them all week!