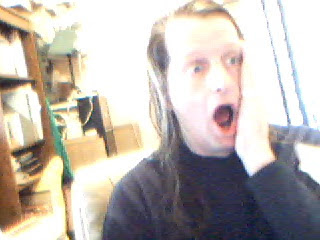 More housekeeping, some of it real. I spent some time sorting junk around the house as well as reviewing the calendar of the summer to figure out when I'll be best able to travel some more. At the lab, I was in a rage about a glitch that seems to have emerged in the new Avid. It seems that importing audio files from cds will go to the D drive, which is where a lot of the Avid software is stored. Later, if you try to use the capture/record tool, it creates an error that requires you to reboot the program. During that reboot, the audio files are lost. Of course they still appear to be on the timeline, but they are hollow and silent. I put together the telecine transfer of the Filmpool Film Frenzy films (see my first blog entry for image) and, since I had done some manipulation of the image since its screening, I figured I'd better correct/finesse the sound as well. End of story is that I lost it and had to start again. This losing of sound happened to me earlier in the week with "Inspector Gadget vs the Zapper", but I didn't know the cause. Anyway, after the second time building the soundtrack for the Frenzy, I recorded it to tape and did a mix down of my group's sequence so that it was stored properly. The files were soon lost, as predicted.
The other housekeeping I completed was with my computer files (not photos or media) that I've compiled from my home computer (files since 1999 but see below), my department head computer (2004-2007), my laptop (2003 to present), and my university office computer (1999-2004) with a total of over 7500 files, many, many of which are duplicated between the computers or that each has different drafts of the same files. I'd been through a similar sorting in 1999 when I upgraded my computer from an IBM 286 that had no mouse, no windows, and a very small hard drive. Back then, I stored all of my files on diskettes so I had boxes and boxes of them. I sat down at this new machine and taught myself to use a mouse by sorting these hundreds, probably a thousand, files. The problem then was that I did not think to keep the well sorted individual diskettes as individual folders but instead threw them all into a big pot together. I ended up with multiple files called "invoice" or "letter_to_lab" and so on. Anyway, I now have 1.2Gb of data that is the sum total of my writing for the past two decades, the stories, the love letters, the grant applications, the invoices, and most importantly, the memos.
Posted by Gerald Saul at 8:03 PM

Email ThisBlogThis!Share to TwitterShare to FacebookShare to Pinterest
Labels: housekeeping