The rain and hail yesterday turned into a heck of a humidex today, which 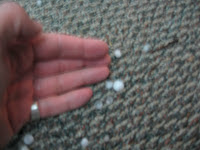 made even videotaping dancers a chore, let alone the actual excretion it takes to dance. Ron Stewart did some incredible performances which were highly physical with a verbal, partially improvised performance aspect to them. These were a highlight for me, his work was fresh, exciting, and funny. Another delight was the return of Michele Sereda's "Moss Lady" performance which I'd not seen since the Secret Garden Tour in 2000. At that original show, I was also videotaping but was also shooting hundreds of feet of 16mm film which was part of the initial research and filming for my "Toxic" films. I have a two second clip of the moss lady on colour, hand-processed film. It was at that secret garden that I first met Dr. Tanya Dahms, a biochemist at the University of Regina who I thought was just a dancer with an interest in photography until she contacted me a few months later to see if she could see the footage. We hit it off and have collaborated in the laboratory and on the dance floor a number of times since then (no, I have not been dancing).
Pictured below, a voyeuristic moment with Michele Sereda and Ron Stewart.