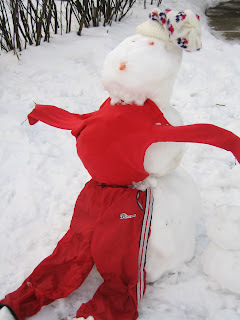 This afternoon, William had his friend Teagan over and at one point it seemed a good idea that they watch a movie. William wanted Batman but she didn't. I intervened and suggested a number of titles including Little Nemo in Slumberland (not the classic Windsor McKay work, just the 1980s pale feature). It seemed a good tie-breaker since neither of them had seen it. However, Teagan vetoed it BECAUSE she hadn't seen it, you see when her movie night at home comes, she wants the movies to be a surprise and thus she does not want to see any new movies outside of movie night and spoil the surprise! I was sort of caught in that my only retort would be that Little Nemo is a bit substandard and rather old and is very unlikely to be a selection for movie night, but I figured this wasn't really going to sell it so I put in The Cat Returns instead.

William wanted to pretend today was Christmas. I think it actually comes down to having this interesting little box that slides apart easily and has a bow on top, making it very easy to put a small object in and present it someone. The ease of gift giving creates a strong interest in gift giving. He constructed a tree from pillows, put a colourful toy on top as a star, we read a Christmas book, went to "sleep", woke up and went downstairs to open this fabulous gift of two kites for dolls, or so I am guessing them to be. Oh well, tis the season.
Posted by Gerald Saul at 6:12 PM