William turned 6 today and Margaret began a month long job as a full time temp admin position at the Dunlop, so I took William to "Underdog" which hasn't been getting good reviews but we both thoroughly enjoyed, him for basically everything about a super powered talking dog, live action with fur rather than the old animated version which is simplistic, hairless and "freaks him out", and me particularly for the performance by Patrick Warburtan whom I personally remember most for being "The Tick", although he was apparently in Seinfeld as well, but I have seen so few of those that I think I missed him but might go back and watch for him because he is certainly, in my mind, the perfect superhero, although technically he is a supervillain in this, or actually just a villain, or perhaps more accurately he is a henchman, but his hair is great, which makes this whole Underdog thing more about hair again as William will not watch even a minute of the old Underdog series but loves the live action, and loves the live Disney versions of Inspector Gadget far more than the original, even though he's been watching those finally as I can record them every morning, commercial free, off of YTV. 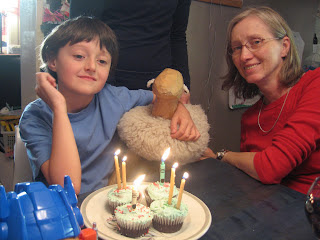 Gerda came to visit this evening and brought a card that featured images of the wood and wool sheep that she brought William as a birth present from Estonia, so we sang happy sixth birthday to both William and "Bricks" the sheep and had a great time until William overpowered Gerda, knocked her into the stairway, and darn near gave her a concussion. The boy is growing up fast.
Posted by Gerald Saul at 10:09 PM