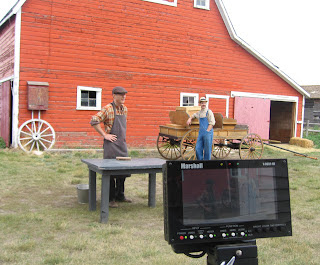 We were off to Moose Jaw again today, observing the production of "Sisu" at the Sukanen Village just south of there. We've never figured out how to communicate with William that when he is supposed to be quiet, that means NO talking, not just whispering. He loves to fill the silence, which is absolutely adorable except when you are on a film set. Anyway, the space was big so even though I could hear him, the odds are that he would be drowned out by the other abundant background noises such as distant (and not so distant) traffic and wind (it was really windy today). Today we watched as they shot a key friendship scene between Tom Sukanen (the main character) and Vic (another local farmer and Tom's only friend). Tom tells a joke which is as unexpected as it is not funny. The delivery was very well done by star the picture Don Wood. It is obvious how much Don has put into practicing the accent an mannerisms that make up this character. His body language, pacing, and delivery are extraordinary, he comes across as someone who seems to be struggling to speak and saying very little, not because he is unintelligent but because he has so much going on in his head that he cannot decide what words to pour out. In the image above is Don and Brian Dueck. I also had an nice conversation with Gerry Coulter who plays Tom's boss from Finland in a flashback to Tom's early life there. Gerry also played a roll in Deric Olsen's espionage film "The Phoenix Agenda" that was created as a graduate thesis film a couple of years ago. He might become a permanent fixture in my grad students' films if this goes on.
Posted by Gerald Saul at 11:44 PM