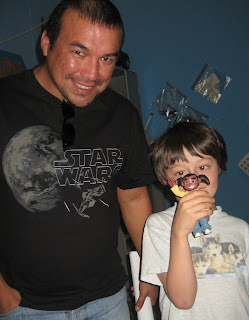 We just go back from Saskatoon, went for a couple of days to shoot film and visit a bit. The high point was visiting the studio where Dennis Jackson is shooting his Wapos Bay series. They are in hiatus right now, but will start shooting season three in a October. Season two will be starting to air on APTN this fall. It is a puppet animated series based around a fictitious first nations community in northern Saskatchewan. I was honored to be involved on the pilot episode (the one hour "Christmas at Wapos Bay") in 2001 at the same time William was born. He was given the nickname "Wapos Papoose" (FYI, that rhymes). They now have a much larger studio so there can be 10 scenes shooting simultaneously. The armatures are now much more sophisticated, I've taken extensive photos so as to be able to steal lots of their ideas. It's shot digitally now, rather than on 16mm as "Christmas" was, so there is much less tension about missing shots or errors. It was a great tour and they gave me a hand, yes, a hand, one of the new wire filled latex hands, soon we'll all be using them.

On the less happy side, I dropped a light meter with dire results...
Posted by Gerald Saul at 9:43 PM