I used up my random encounters too early in the day. This morning I ran into David Gane who was a student of mine at one time (one of my first courses) and he now has a house which is the same design as a house I knew as the Taj-ma-hole that I rented with some party-types back in 1988, but David's house is across the street from the school and his daughter, who was born while his wife was in another of my classes, is just starting kindergarten at William's school. While William was in class, I had a meeting about the upcoming First Nation's End of Life conference that I overseeing video production around, and we walk out of the room and run into a couple of suits standing there, and of course I don't want to get close because I've got a biscotti in my hand that I grabbed off the table in the meeting room (it was left over and paid for, so why no...?) when one of the suits says "Hi Gerald" and it ends up being my old friend Kevin, looking unusually dapper in a nice suit and shined up shoes. I was a bit flustered to have caught unaware like that, but needed to rush off since the school bell was about to ring. So a few minutes later, I am picking up William from school and we run into one of William's friends, Ethan, and his mother. The two of them were in pre-school together and had lots of fun. They apparently live quite close to us now and Ethan is now also Kindergarten (due to a later birthday than William) at the same school and thus a classmate of David's daughter. That's all fine and dandy, right? 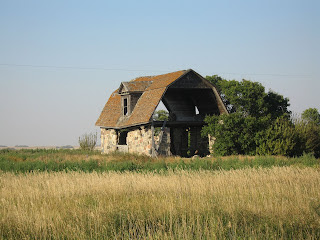 So then we embark upon the trip I'd been thinking about, but obviously not planning, all day. One of Chrystene Ells' last shooting days is around the mock-up, full size sculpture of ribs of the ship, built on the prairie, by Chris St Amand at his acreage near the village of Avonhurst, about a half hour from here. I had been promised instructions, but with production in full swing, these sorts of things are easily overlooked. So William and I cruise out of town, fighting traffic all the way as it is the beginning of a long weekend, and arrive at this 3 house town at a few minutes past five, just in time for the Co-op store employee to drive away and to our surprise, we can't find the location. Not only that, but we can barely find people, unless you count those driving combines on nearly every field. Up and down every road, but no random brushes with people we know were forthcoming. My cell phone eventually ran out of money as I called the director, whose phone was off, and whose number was the only one I brought with me (no real planning, remember). However, the town and surrounding roads offered up many treasures, including the title character from the old Loudon Wainwright III song (see below). 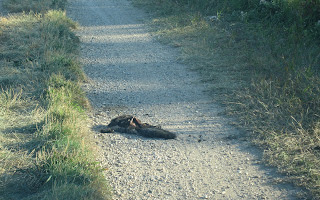 We also picked some flowers by a house that's not a house anymore. I'll probably come back out and shoot more film as there are many great old structures that are falling down without looking dilapidated. 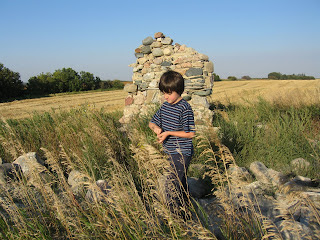