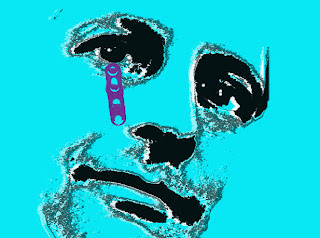 Spent much of my day working on a new video while William played with Daniel, Leesa Streifler's son who is the same age as W. This is probably the first time in 2 weeks that I've been able to work for more than 15 minutes during daylight hours without an emergency (a missing Lego piece constitutes an emergency this week). I'm plodding along frame by frame and having wonderful results now that I've started making new brushes and extracting photo elements (such as my face) to do so. I had a great conversation with Leesa today, our first "sabbatical party" and I was able to show her what I've been doing (even though the program crashed - some sort of disc error - during my demonstration) and she's even cool with me doing a response to her style of work (I'm thinking about her "Normal" series) as a moving image piece in this style. I've been wanting to do this for years but never seen to have the energy and time to even start it. The image above is from this week's one minute animation project; I'm calling it "Loose Screws" and I'm trying to get it done for the end of the week for the Filmpool festival event.
Posted by Gerald Saul at 12:35 AM