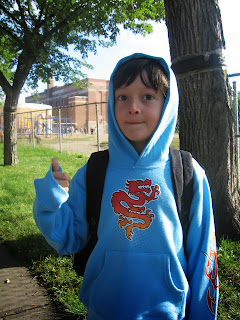 Today was William's first day of grade one, the first day that he's stayed in school all day long. I walked down and picked him up for lunch, as I intend to do every day, and we ate sandwiches in front of the tv. I looked for Flintstones season 1 at the store the other day but they didn't have it, so I'll have to look around some more. I would like him to have at least one year that reflects my own childhood, and don't we all? I think a key to nostalgia is the desire to convince others to have the same nostalgic feelings we have ourselves. Today William made his own sandwich for the first time. It seemed a bit of a mess as the peanut butter was chilled and the bread was soft, but he made it and ate it, so who am I to criticize?

While he was in school I finally got a chance to watch Sylvie Blocher's "Wo/Men in Uniform" at the Dunlop Art Gallery (see July 14 posting). It's been up for 6 weeks and closes today but to date I've only managed to watch short clips of this 50 minute project that closes today. It was quite engaging, although perhaps both too short and too long. It could not impact with as its maximum potential audience because few gallery goers are prepared to sit for an hour during a stop at the library. However, I know that there were dozens of hours of footage and I often felt it was just skimming the surface. There are short portrait/interviews of about a dozen Regina police officers and her off screen (muted) questions must have been well delivered because each officer broke from his or her expected response and revealed something personal about their relationship to this job. I wanted more, but each was only allowed a few questions, a few minutes, and then fades away. I have to criticize the gallery, although I have a great deal of respect for it generally, for the quality of the presentation; the projectors and air conditioning created an annoying din that made it less than comfortable to listen to the voices. I ended up sitting on a chair, rather than the couch, so that I could sit next to the speaker and be better immersed into the program.

I finished "Loose Screw", a one minute video in a similar style to the five second video I have on YouTube from a couple of days ago. The Filmpool is having a screening of short videos with an open entry with the deadline in a couple of days, so I'll enter this. I will probably also kinescope it and work it into my Modern project.
Posted by Gerald Saul at 8:22 PM