Had breakfast with Mike and Paul at their parent's house. As always, the conversation turned to Lego. It seems that they built Lego as kids as well, so I suggested looking for the sets. Unlike my mom who wanted me to take all the stuff that was mine out of the house shortly after I moved out, Mike and Paul's mom seems happy to store their stuff, cleverly hidden so not even they can find it. So with her help, they uncovered three Lego sets from 1977. Paul is probably building them right now. 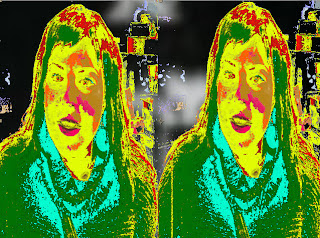 I watched Cody Banks 2 with William, it was uninspired, then worked on my Carle Steel video (another Warhol styled "Modern"film). I put 4 frames of Warhol's "Empire" in as the background. I don't know how to get stuff off of Youtube, so I simply used the print screen command to grab whole screens of the image as it was in pause on Youtube, the copied them into photoshop, cropped them, then imported them into After Effects and created a loop of them. As I promised her, I have made her thinner (by about 1/3).
Posted by Gerald Saul at 5:35 PM