I was locked out of the editing room today, my key card didn't work even though it worked on other doors (thus it hadn't expired). They system administrator, Kalyn's card didn't work either. I was meeting my assistant about the End of Life project but couldn't look at it. It ends up that the battery on the door was dead. I never considered that such doors would need batteries but it makes sense. After I finally got in, I did get a bit of work done, as well as collecting some clips of my films for the web site in the other Avid (love having two edit stations in one room). 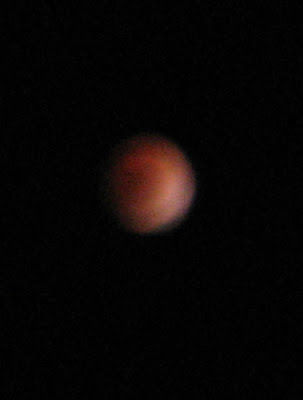 There was a lunar eclipse tonight. We got William out of bed and into a coat to take a look (temperature has been rising, it's nigh -20!!!). The moon has a reddish glow.
Posted by Gerald Saul at 10:26 PM