This morning the chip repair guy came and fixed the two chips we got in our new tub during renovations  around it at $75 per chip. The light fixtures for the bathroom also finally arrived. Luminesque gave us a discount for the inconveniences of the three delays. They aren't installed yet, I'll post pictures when they are. My video card also arrived. I just opened it up and was very intimidated; I think it needs its own licence plate. This thing is massive; it takes two slots and must have five times the mass of my old card. It requires its own power. I was a bit freaked out putting it in but finally got it and now it working really well. I imported photos from my camera and it just immediately sees all the photos and displays the thumbnails; no delays at all. 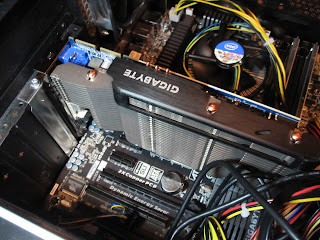 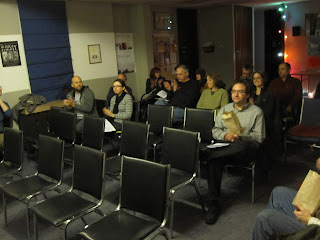 This evening I presented the Fragile Harvest film screening at the Filmpool. The crowd was nice. Everyone stuck around afterwards and talked. (there were about twenty people. quite a few more than are in this photo).
Posted by Gerald Saul at 11:28 PM

Hey Gerald, thanks for organizing the screening. As everyone seems to agree, it's been too long since we've enjoyed an evening of experimental films.
-steve