I spent all afternoon cleaning the basement, putting tools away into my new cabinet,disassembling the flimsy shelf that I've overburdened for the past few years and was beginning to lean dangerously, and trying to sort valuable construction of art creation items from useless pieces of crap. This evening we went to "The Three Musketeers" (in 3D). It was quite fun although stretched the limits of believability a bit too far a bit too often. Also, and perhaps this was the 3D influencing me a bit, I found much of it very unrealistic. Even sets which could have been real (palace hallways for example) felt like they might just be digital constructions. 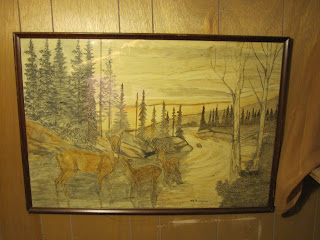 I leave you with this image of a pencil crayon drawing, about three feet across, which came with our house when we bought it in 1996. It was so awful that I couldn't part with it and I hung it on the wall in the tool room. However, over ten years ago I put up a shelf in front of it and it has been mostly hidden ever since. I'd like to send images of it to the Museum of Bad Art someday.
Posted by Gerald Saul at 9:32 PM