I had a few meetings at work including an interview with Noelle about the grad school and a hundred interconnected decisions and random events (she needs to write a paper which talks about careers). I telecined the terrible film festival footage, which had a coincidental connection as the piece of glass I was using (the same one I've used for over two decades as a tracing table, rotoscoping screen, kinescoping screen, and telecine screen) I got from one of my professors (SC) just before he moved away. There were two or three people who inspired me to keep going on the path I was on and he was one of them. 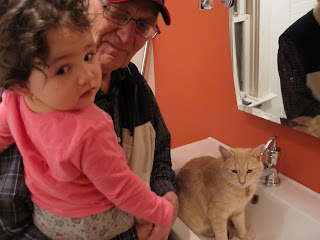 The bathroom reno moved ahead as the plumber came in and fixed 3.5 of the remaining 5 tasks. She brought her father and her baby (a one year old actually, she loved Sylvie, our cat. Sylvie loves the sink).
Posted by Gerald Saul at 9:53 PM