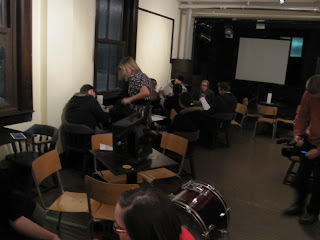 We held the Terrible Film Festival at the Creative City Centre this evening. There was a surprisingly accurate full page article on it in the UofR student newspaper, the Carillon yesterday.  Marian Donnelly was fantastic, the whole thing went off without a hitch. The films ran without breaking, the audience seemed to have a good time, Luke documented everything which has always proved to be a huge distraction but is hugely important because a few of the films had either live accompanyment or they had things happen (emulstion altering during projection for example) which I could not simulate in post-documentation. Noelle played host which gave the event focus and made everyone feel like they were at an organized event (really had them fooled). I had a really good time. Thanks for all who came (there were about 3 dozen people there, which is quite good).
Posted by Gerald Saul at 10:48 PM

They sure were Terrific! I only got to see half or maybe even less unfortunately because I was feeling Terrible. Had to bolt right afterwards too, but I did want to congratulate you guys.
Congrats!
Is there any way of seeing the ones I missed?
Was the one with the film stuck on it [Belanger's I think] something that happened live? Or was that planned / optically printed? I couldn't tell from where I was sitting if the blowing sound was you or on the soundtrack. Either way, it was one of my favourite of the night and I kinda like the idea of planning ahead of time to have a chunk of film get stuck in the gate.
It was a big relief when it finally got jettisoned.
Ahhhhh