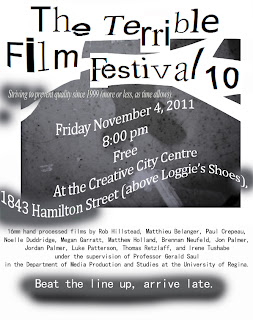 Today I developed a student's film (test strip was perfect but student's film was a wash, probably a mis-loaded roll), had some significant roll-bar problems trying to transfer a bit of the festival footage to video using an SLR so that I could send it to the CBC for possible news coverage (wow, a first for this festival!) and worked on posters to promote two of my forthcoming screenings, the Terrible Film Festival (two days from now) and films from the film farm (in three weeks). I should be doing more writing on these but seemed to spend too many hours answering emails.  On the renovation front, George did a major sanding job on the bathroom, leaving it pretty much ready to paint.
Posted by Gerald Saul at 10:27 PM