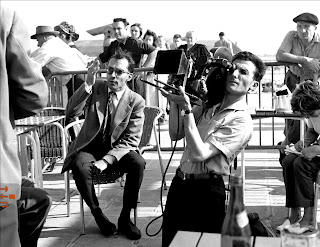 As I'm alluded to a few times over the past months, William and I have been watching a French film every Friday. This began with a conversation with his art and core French teacher, Ms Wilson, who told us that an important aspect of core French this year would be an appreciation of French culture. The combination of art and French culture quickly led me to ask her about the inclusion of French cinema in the curriculum, to which she admitted that most French films contain content which would not be appropriate for Grade 7 (at least, not according to the school board). Therefore, we began watching on our own and William would write a short report on each film. All of the films were viewed with subtitles on. In cases of silent films, they were watched in English. The point, as I said, was French culture, not to try to understand dialogue. Most of the films are from France but a few are from Quebec. Seventeen of them are in the Time Out online list of 100 best French films of all time as voted on by French film industry experts. One exception, "Babette's Feast" is not a French film but has a main character who is French and speaks in French for much of the film (I remembered the film so fondly that I picked it up from the library without even thinking about what language it was in until we sat down to watch it). I tried to ensure that he watch most of the important directors. Missing from the list is Luc Besson. Prior to beginning this tradition, William had watched his French films "The Extraordinary Adventures of Adele Blanc-Sec" and his American film "The Fifth Element".
Today, this being the last week of the school year, William will be handing in the last of his reports. I hope for us to continue this weekly tradition but we might change it to "Foreign Film Friday" instead so that I can introduce other gems.
Here is his list, (Numbered ranking indicates film is on list of 100 best French Films.)