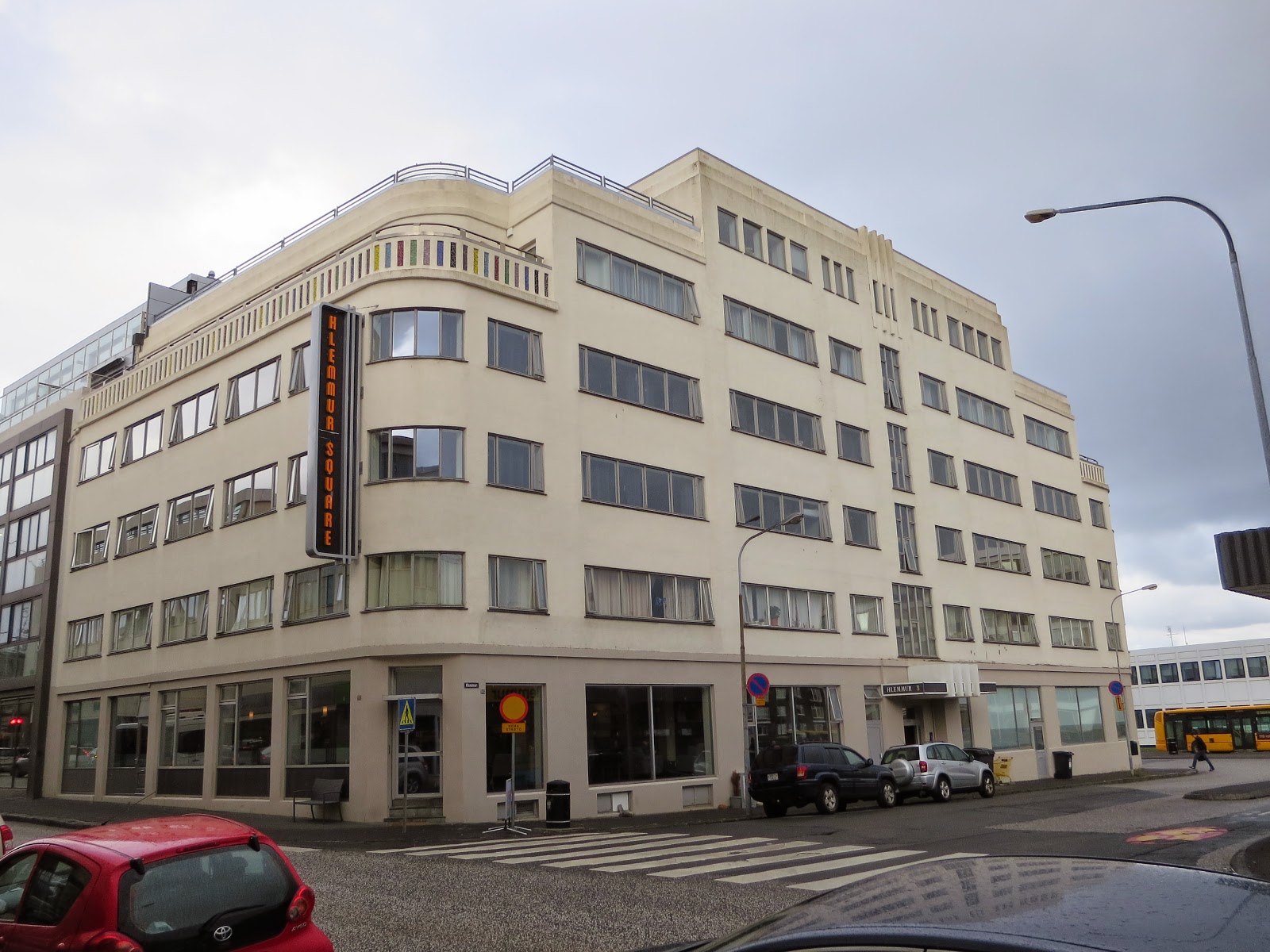 In an odd turn of events, we did almost no planning towards this trip. I booked the airline tickets about a month ago, but it wasn't until yesterday that we actively tried to find a hotel or make other plans. So here we are in Reykjavik, Iceland. We've booked into the Hlemmer, which is a combination of a hostel (first three floors) and a hotel (top two floors). It ended up being a really good choice. The staff were very friendly and it was good to have people in the lobby who were not all rich tourists. 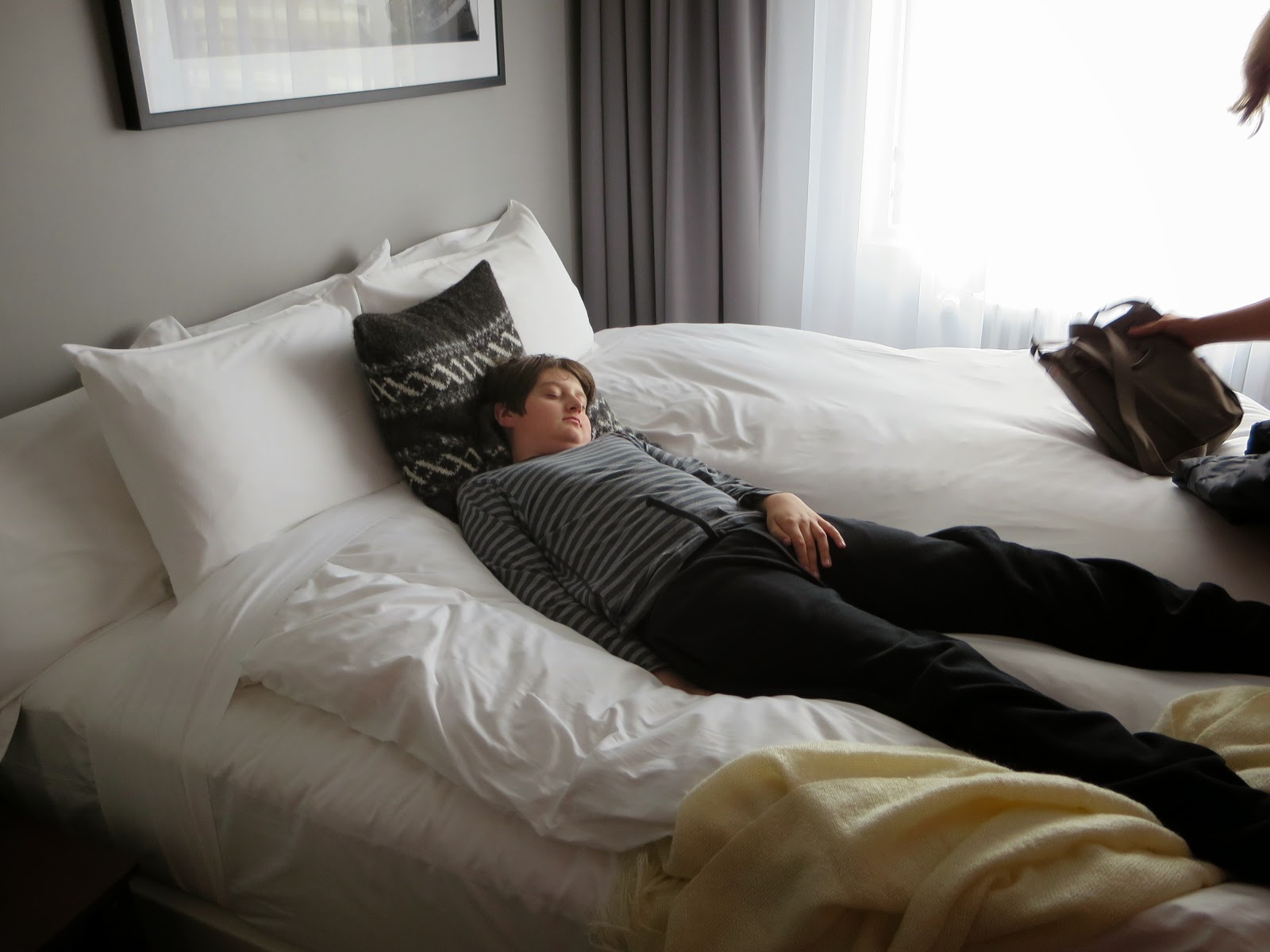 The flight was six hours and we crossed six time zones, so were arrived in the morning, having left last night. The manager was tremendously nice and not only bumped us up to a larger room to accomidate William (at no extra cost) but also let us take possession of it a few hours early. William crashed hard. I went for a walk but fell asleep in the late afternoon for a while as well. 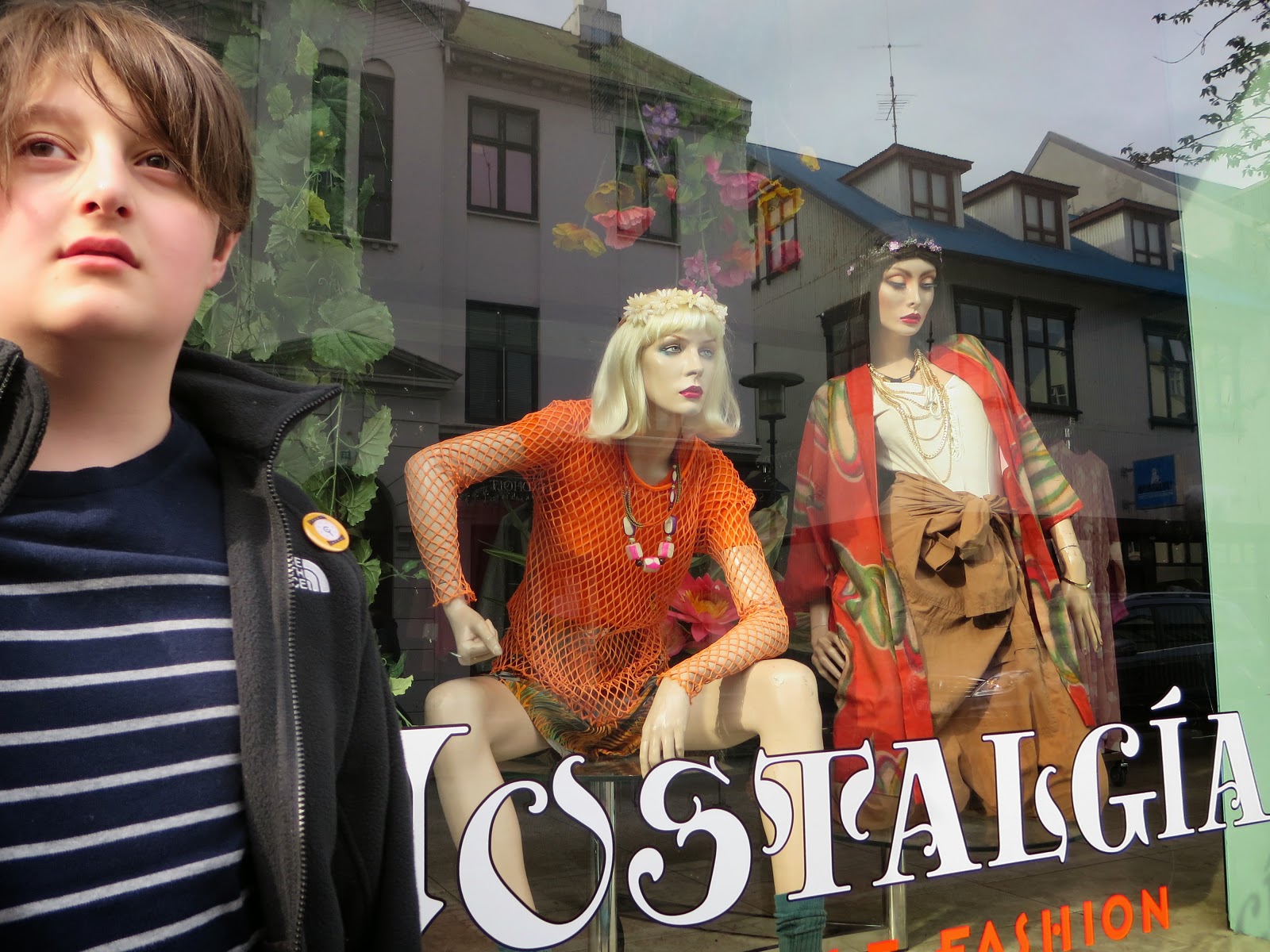 By later afternoon, we were all up, curious, and hungry. Reykjavik is a very modern city with a European feeling about it. Almost everyone speaks English (as well as other languages). We were told that in the 80s, it became a requirement that all children begin learning English at age 10. Thus, anyone between the ages of 10 and 40 should have some working knowledge. In fact, everyone we've met so far has had fantastic English skills. 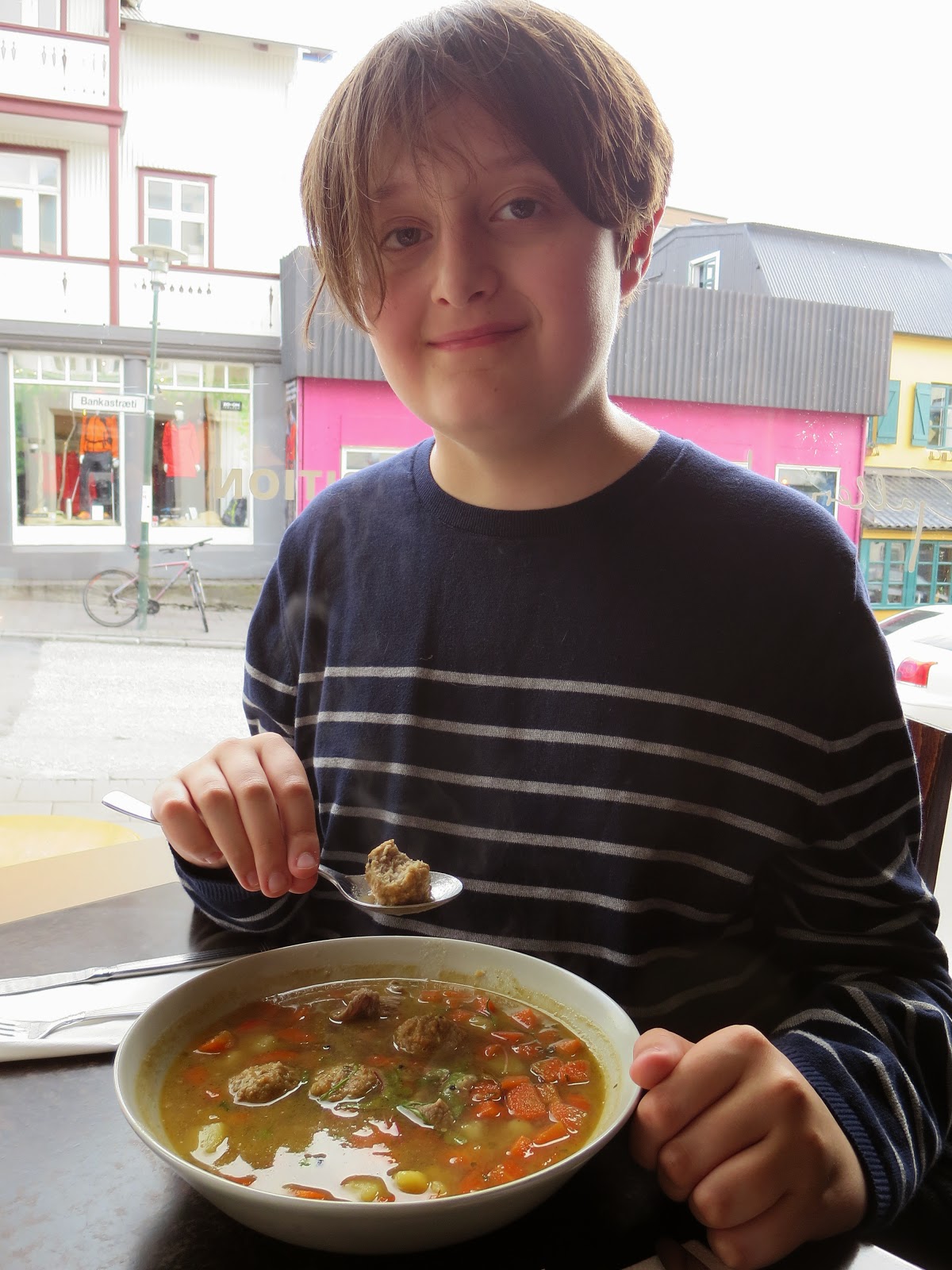 Or first meal was at a place called Salon. It was on a recommended list that Margaret was given. The food as amazing. We had a couple of courses, soup and entrees, even though we'd probably have been satisfied with just the soup. William has lamb. The prices for food are shockingly high but we slowly get used to this as the week progresses. 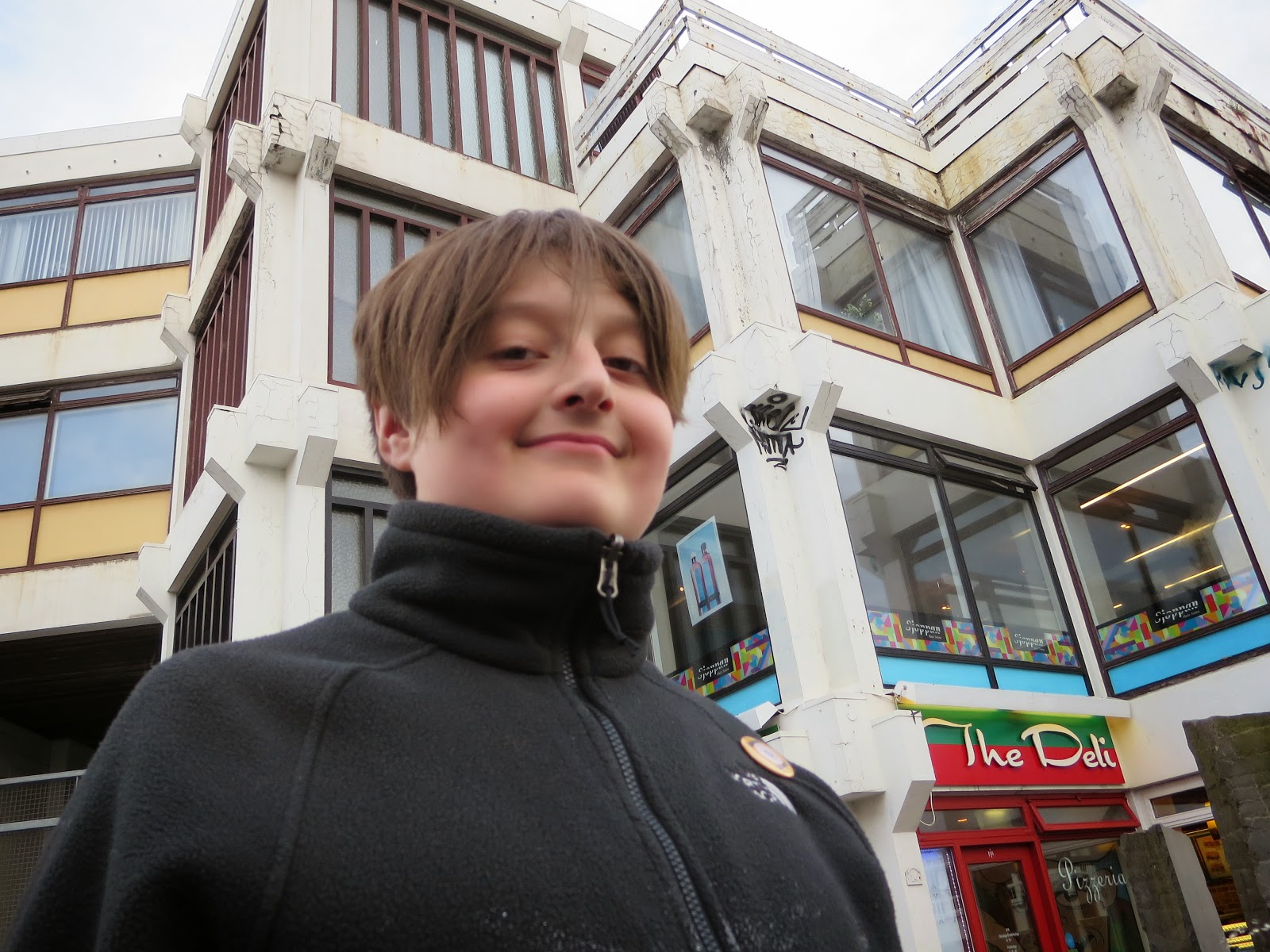 Architeture is strange here. For a 1000 year old nation, there is surprisingly few buildings built before the 20th century. We notices a lot of 1930s Art Deco styles (such as the hotel at the top of this blog which we've been told used to be an embassy) and more contemporary modular, geometric styles of building. 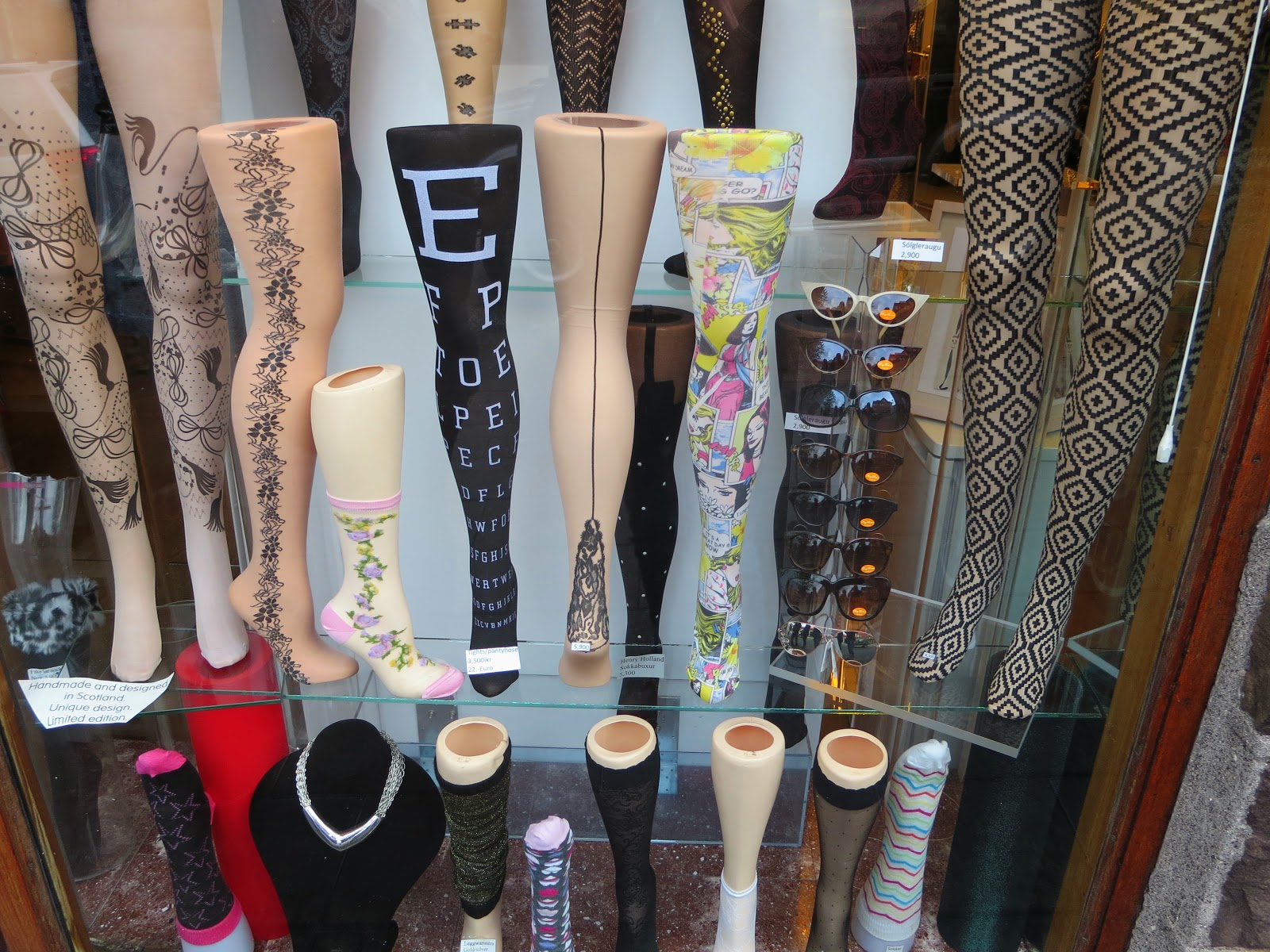 If one thing unified the fashion, it would be the abundance of leggings, tights or tight pants with almost all of the women, regardless of age. I noticed this store font display of hand painted tights (I think they were about $50-$75 each).
Posted by Gerald Saul at 9:32 PM