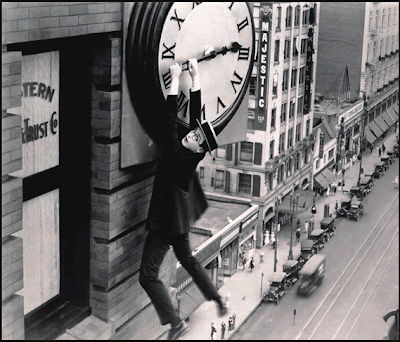 This afternoon I met with John Hampton and we looked at the videos he's been editing. We are to preview all four of these shorts next Friday so he needs to whip them into shape. The two he's headed up are really close, we just need to review the other two which are in Mauricio's hands and he's out of town right now, coming back soon I think. William and I watched Harold Lloyd's "Safety Last" this evening. I recorded in a few weeks ago along with a number of other Lloyd films from the same time period and we've been watching them one at a time (they are around an hour each). I skipped a couple others to watch it as he was heavily referenced in the "Back to the Future" films.
Posted by Gerald Saul at 9:03 PM

Email ThisBlogThis!Share to TwitterShare to FacebookShare to Pinterest
Labels: `