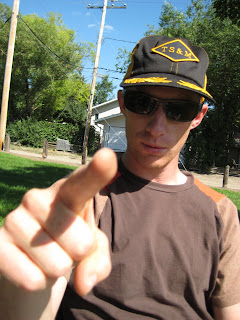 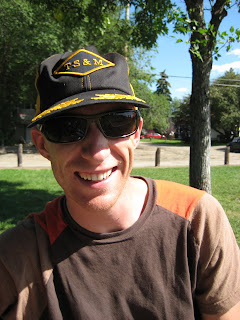 I met up with Shawn Fulton in a park this afternoon and we recorded over an hour of an interview in preparation for an article I want to write about his really cool super-8 films. William and Sylvie also came. Sylvie climbed a tree very well, limited only by her leash. William bumped his head and cursed the planet for his pain and hoped that we crash into the sun. He really didn't cheer up until we were at grandmas and got some new Lego (Indiana Jones Jungle Cutter). We all went over to Ed/Faith/Marin/Rowan's house and they hosted a bar-b-que and made it a bit of a surprise party for William. We stayed rather late but there's an even louder party next door so it won't be an early night anyways. Sylvie has started being more playful, probably because she is becoming more comfortable here but probably also because she is de-wormed and de-ear-mited. She has some sort of fur covered ball that she goes nuts for.