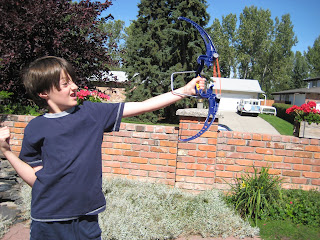 Today was William's Birthday. First thing this morning Margaret presented him with the foam tipped bow and arrow set that he was instantly in love with. She'd picked it up in Penticton before she knew we'd be watching Mythbusters about crossbows. After breakfast, to my surprise, William relented in his daily requests to return home and agreed that it might be nice to stay in Calgary for a day! We were basically ready to get on the road but instead we did some shopping. I picked up the $30 worth of stuff I wanted from IKEA (plus the $55 worth of stuff I hadn't intended on getting, but that's getting off cheap). Sharon took William to Toys R Us and he picked up an Agent's Lego set (she pointed out that he took much longer to choose a slurpee flavour than the Lego). I made peanut chicken, at his request, and as I'd not made a cheesecake (his cake request was "one of dad's cheesecakes") so he settled for Oreo cookies and a movie for desert (we watched "Arctic Tale" on their big screen tv). It was a nice relaxing day.
Posted by Gerald Saul at 11:09 PM