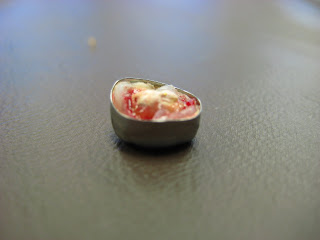 We left Lethbridge today but, as per our pattern, did not get away until nearly lunch. William dined mainly on a bag of almonds. The roads into the mountains were full of maintenance delays and it rained a lot. We stopped at a very nice museum at Frank Slide. However, the event the museum focuses on took only 90 seconds, so the museum was a real case of all form, no substance. We stopped for the night at Creston. We chanced a little motor inn and were very happy. We got the last room. It had three queen sized beds but we got it for the price of a regular room. The outdoor pool was small but was heated and William and I had an hour of fun dueling with pool noodles. We went out to eat and William, still moaning a bit from an almond he'd chewed earlier, suddenly spit out his crown off one of his molars. It was one that had been put in surgically when he was about 3. Not only that, but the tooth had broken away horizontally level with the bottom of the crown. It bled for a minute but then stopped. It was not sensitive to cold or to eating. We put a call in to his dentist, Dr. Kristie White, and she called back to say that a partial root canal had been done to that tooth so if he isn't having pain then to just keep it clean and go on with our holiday!
Posted by Gerald Saul at 3:54 PM