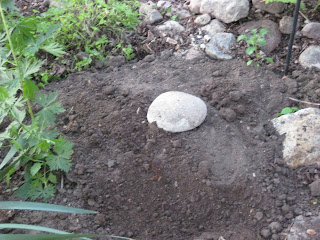 I woke up early this morning and started thinking about my cat, wrapped in plastic, frozen in my deep freeze. I couldn't stay in bed thinking about him so I got up, put on some work jeans and runners, and got a shovel. I found a good spot in our garden which wouldn't be disturbed and dug him a good sized hole about 2.5 feet deep, as deep as I could manage. I told Margaret what I was up to and she thought I should consider William in the process. He was up late last night and slept in but once he was up I immediately told him what I was doing. He asked to help so I went out with him and he dug a bit more with me. Meanwhile Margaret had wrapped the cat in a blanket and tucked one of his toy mice with him as well as the goldfish Big Gil and others. William carried him to the hole we'd dug. He'd not gotten much lighter and still must have been 16 pounds. I helped place him in the hole and William insisted on covering him one shovel full at a time with the dirt. We have a stone from the mountains to mark the spot, a stone Margaret will soon paint.
We got this cat in 1996. I'd been working for the tv show "Utopia Cafe" in its final season and a new girl was hired as an intern. She had been traveling and didn't have a place to live so in September she'd been sharing a house with someone else from the show who had a cat. This stray orange cat whom she named "Tony Big Balls" for apparent reasons had been prowling around their back door and she'd taken to feeding it. However, she couldn't take it in since it fought with their resident cat. It was warm so they had no worries. Some of the next details are a bit fuzzy in my memory but for some reason they connected up with a woman who had a personal crusade to help cats and adopted many of them off the street, getting them fixed and having them registered under her own name, regardless of whether or not they had a previous or current owner. Returned in this state, Tony no-longer-big Balls disappeared into the night, returning to their back door after a few days with serious fighting injuries. With no money for a vet, she had no choice but to call the humane society to have him picked up. Her next call was to me since she knew that I had just purchased a house (our possession date was Oct 1). She begged me to go to the humane society and adopt him; the humane society had no tolerance for the cat crusader and her set-cats-free-on-the-streets attitude so Tony was not long for the world. Margaret and I went down and adopted him, renaming him Baron Munchhousen. However, the house was not yet ready to be lived in as we were doing a lot of painting and sanding of floors, things we could not have a cat around for. We housed Baron at Mike Grzesina's apartment for about ten weeks and Mike fed and fed and fed him until he began to take the shape he was known for. At Christmas, when Mike needed to leave town, our hand was forced and we needed to stop our renovations and move in.
Posted by Gerald Saul at 6:17 PM