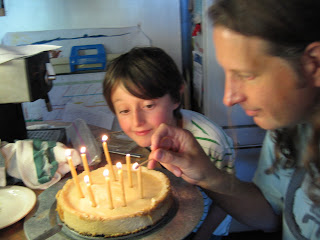 I finished the sound editing and mixing for my audio for my new film "Grain: Summer: I Can't See the Forest Through My Dreams" this morning. I'll ship it to Toronto tomorrow to have an optical soundtrack made. I finally tracked down the last place in the country to still make those for 16mm film and I committed myself to making four more films to be finished on film with my Canada Council grant. I will make one of them on 35mm, which won't save me any money but may be slightly less questionable by the labs (very few labs still make prints of 16mm either). It is about 10 minutes long and is about vacations. It will play at the Antimatter Film Festival in Victoria in October.
Yesterday I baked William a cheesecake for his birthday. He asked for coffee flavour! Today he tried out the climbing wall at the science centre: he got up about 30 feet which is about 1/3 of the way. He wants to try again tomorrow.
Posted by Gerald Saul at 11:43 PM