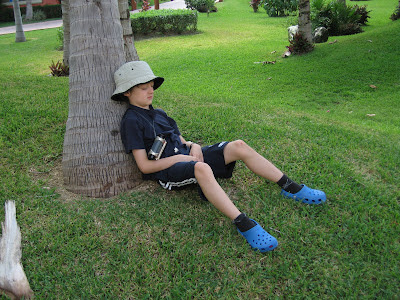 First thing this morning (7am) my brother-in-laws Paul and Al went to the beach and reserved 10 of the lounge chairs and guarded them until we could all go out there a couple of hours later. It was our plan to spend the whole day in the sand and surf. However, the wind decided this was the day for it to cool off. Not that it was really cold, probably 27 or 28 degrees, but the wind made you feel cold and uncomfortable, especially if you were wet. We spent the morning there. Margaret went the resort store and bought a cheap plastic bucket and a couple shovels for sand castle work, billing the $15 dollars to the room. I was a bit outraged at the price, but I found things of that nature to be similarly high priced when I went to town a few days later. I picked up the pictures of William and Michelle with the monkey that were taken on Monday night after supper - they are show with no commitment or even name taken but cost $8 per print, no negotiating. Steep by Mexican pricing but not really bad. Monkey's hands are really warm and they feel wonderful when they are on you. After supper we spent the evening in our room with all the kids and played cards and watched "Goldfinger". William seemed really pumped, even though he discovered the tradition of the siesta (see above) but eventually fell asleep this night between Michelle and Sean. "Old Maid" became the game of choice, it has no winners, just one loser.
Posted by Gerald Saul at 10:17 AM

I read this sentence a few days ago and it keeps running through my brain. What a nice, nice turn of phrase! "Monkey's hands are really warm and they feel wonderful when they are on you." It's fun reading about the trip. I'm glad you're posting about it.