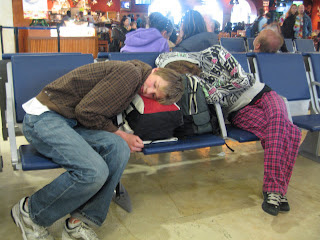 The trip home was grueling, but we had bits of fun. We got on the bus at about 1am (it was late) and it took us to the airport where we found a huge line of people already waiting. Once in line, we noticed two things: the line was not moving and no one was being processed at the head of it, and that the schedule on the monitors said that our flight was delayed over 4 hours! We played cards on the floor for a while but eventually the line was processed and we got past security and were given ten dollars each in food vouchers. Of course this never goes far in an airport, but it covered a few pancakes (William's new obsession). Once on the plane, it took an hour to get the luggage on (they initially put the wrong luggage on our plane and had to swap around) then they had to fuel up. The crew on board were surprised we'd been waiting so long; they were only told at 1am to divert away from Ottawa and come to Cancun to pick us up. I am suspicious of the travel rep on the bus who didn't tell us about this, even though they must have known by then. The flight crew had no idea what the mix up was. Margaret hid the five "bobbleheads" that I bought yesterday inside William's rabbit puppet for him to find while on the plane, he was much happier with them than I could possibly have anticipated. He probably played with them for an hour. I thought he could share some with his friend Teegan (who collects them) but he lies them too much. Customs in Regina took 45 minutes since two planes arrived at the same time and there wasn't enough crew at the airport to unload luggage. I was at the house at a bit past four o'clock. In the end, the trip from hotel to home was 15 hours, with the flight being 4.5 hours of that. At least I could just go home, my sister Sharon had to drive back to Calgary after that as everyone had to work and go to school (7-8 hour drive).
Posted by Gerald Saul at 10:03 PM