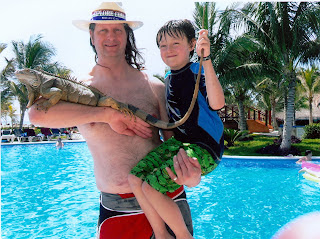 Everyone stayed close to the resort on Friday. William's heat rash returned with a vengence; Margaret wrapped wet wash clothes on his arms to keep them cool and we stayed in the shade except for a few dips in the pool (which tended to cool him off well). There is a fairly big open air (roofed) restaurant off the pool area where we could eat and play cards much of the day. It rained a bit, but that didn't cool things off significantly. We got our picture taken with an iguana (getting smarter, had both of us in the picture so spent only $8). I talked at length with some storekeepers about a prominent image they sold drawings and sculptures of. It depicted an Aztec warrior holding a sleeping Mayan princess in his arms. One foot of his is on a stone. She wears a crown. It is apparently a tragic love story, Romeo and Juliet-like. I didn't buy any copies of it and can't seem to locate it on the internet (I will keep searching, but the language barrier got in the way again, preventing me from fully understanding the names and reliance). We ate at the steakhouse, it was good but less exciting than the other restaurants. I went to see the stage show but found it dull. Apparently it was the worst of the week, so I chose poorly. I didn't stay to the end.
Posted by Gerald Saul at 3:26 PM

I've seen that painting you describe in a lot of Mexican restaurants in California -- usually on black velvet. Here's a link to a stunning number of identical, yet hand-painted, versions of it: http://www.velvetpaintings.com/galleries/tjstandards/oldwest-on-black-velvet/aztecs-on-velvet/index.shtml