Saturday, our last day, was pretty good. There was fun in the pool in the morning and an early lunch and cards for Margaret and the kids in the restaurant by the pool. The only mishap was when William convinced me to join him on the kids play structure. It is big and made of real stone, so I had no worries about climbing it, but my 18 year old nephew told me was too big for the spiral slide, so I wasn't doing any of that. However, I was convinced to go down one straight slide. It was only 10 feet long and wide, probably 7 or 8 feet, with water pumped down it continuously. No curves, no way to accidentally run into a kid, no problem. Wrong! The water slide aspect of it meant that I went fast, and unlike the regular pool, everything in the kids play area is shallow. I hit the 10 inches of water much faster than I'd ever have expected and skidded along the 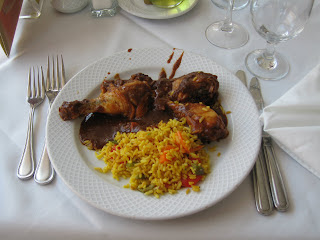 cement bottom on my right elbow. It still hurts and I cannot lean on it four days later as I write this. I drowned my pain with a couple of paralyzers (one vodka, one tequila - the latter was better) and some mescal and a silly thing called the Miami Vice which basically combines pina colata and strawberry dackari mix with some rum. I sat with Margaret and everyone with lunch but I opted to eat in the bigger dining hall (which doesn't serve until 12:30) primarily because I was still staking out the perfect video clip for She Said 13. I ended up using one I'd shot the day before by the pool, I ended up being a bit late for lunch and not many people were in appropriate positions. However, the great surprise was that they were finally serving mole', a really great Mexican dish made of a spicy (not sweet) chocolate sauce (see photo). I was in heaven. Last night was supposed to be "Mexican Friday" and staff wore traditional costumes (and the theatre played its rather uninspired traditional folk songs) but during my stop at the buffet after the Steakhouse I was told that mole' was not on the menu. Tanya told me last week that I could buy canned mole' at Tony's here in Regina, so I'll probably do that sometime.
We had our last meal at the very entertaining Japanese restaurant (see video of inverted onion slices with brandy on the stovetop).
After supper, my sister Sharon, her 18 year old son Chris, and I took a cab to the market on 5th avenue in the nearby city of Playa del Carmen. Our cab driver, "Burger", had a nice new car and a dvd player running concert videos. The laws in Mexico differ and he is allowed to have the screen installed in front so he can watch it while he drives. Chris and him talked music and they hit on a mutual interest, Guns and Roses, and in a moment he was running one of their early 90s concerts. Chris says he caught the whistle when he went to their show. The city shops were very touristy but a great experience. I was approached by my first crystal meth dealer (I just don't go into the right neighborhoods anymore), I bought some bobble-heads, and a $37 bottle of Tres Generations tequila (that Stephano our tour guide from Wednesday said was the best).
We checked out at midnight and waited in the lobby for the bus.
Posted by Gerald Saul at 8:05 PM