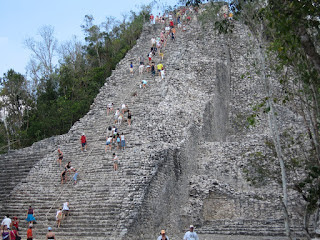 Today we took a trip to see the Mayan ruins at Coba. These were really amazing, we were able to climb the tallest pyramid in the region (took twice as long to got back down). The tour guide, Stephano, was from Italy and he gave a lot of information although I felt some items were more myth than fact. I began to notice the complete absence of any books for sale about Mexico, either in Spanish or English. I think someone could do well selling coffee table books to tourists. We also went to a village and met a real Mayan family. They live in complete squaller. We were told not to give them money because they were supposed to earn it and not get lazy. 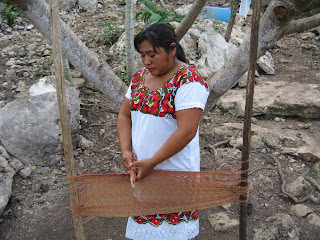 The soil is only a few inches thick but they live on food from their yard and a bit of extra earned from these tours and from weaving hammocks. A hammock takes about 40 hours to create and they get 25% of the sale - they go for 20-30 dollars in the market. That's about 15 cents per hour. Apparently, about 70% of Mexicans are either aboriginal or of mixed blood and could claim aboriginal status if they wanted to. As a result, there is no distinction made, no history of reservations or that sort of thing. The Mayan language still exists and, due to the fact that this region has no gold or silver, they were never aggressively conquered. 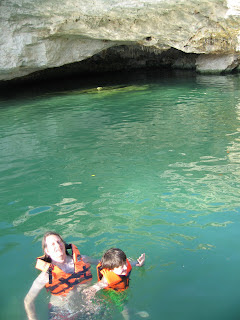 The 3.5 million pure blood Mayas along this coast cling to some traditions, but their cities fell before Columbus and their vast number of books were burned by the Spanish (I believe under orders from the pope). We also went for a swim in the healing waters of a sink hole; these holes are abundant in this area, they are spots were the vast number of underground rivers hit the surface. William got a heat rash on his face and arms. In the evening we were pretty tired but we played cards with the whole family in the lobby.
Posted by Gerald Saul at 9:01 PM